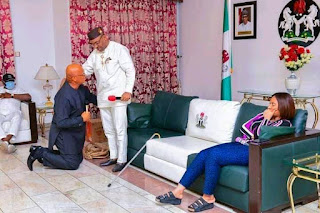 MY OPEN AND SINCERE ADVISE TO GOVERNOR  UDOM EMMANUEL

Even though I’m not personally in support of your choice of the next Governor, but i”m your brother from the same local Government who to that extent, loves you sincerely and wishes you all the best.

You know we have a culture in Onna that sticks every one together as “Aduk”. Politics shall varnish while we still remain brothers.

You know God does not act or speak like man but only with signs and actions for those who have ears and discernment to receive God’s message.

And when you fail to see the subtle signs of God that points you to the direction of His impermissibility, the consequence is often disastrous. I warn!

Your Excellency, have you noticed that your closest friends and allies have worked away from you, and off course, it is clear that they are working away from an ill gotten Governorship aspirant they would never wish to queue behind; and more will soon follow suit in their numbers?

One of them is so close that he was your best man at wedding while others are your longstanding and childhood friends of decades even before you ever dreamt of becoming Governor.

Do you not see anything wrong with the development? If you have not, I have seen a lot being wrong.

Quote me, any man who does not listen to the advise of others especially close fellows who have proven to be loyal and trusted over time, is an imminent failure already.

Don’t forget that the ones who have openly left you, do so because they love you sincerely that they could never pretend before you about their difference with your own arrogated political choice; while your core enemies still stick around you and be pretending that all is well, but a very little time will reveal them because they stick like a time bomb to hit you hard when you become most vulnerable. They all have where they truly belong and where their minds are.

And may I shock you that a lot of them stay pretending to be your loyalist while sponsoring attack on you behind the scenes.

I can say on strong grounds that 80% of those who still hang around you and keep assuring you of their supports for your choice of candidate do so because your failure is already well manipulated and your ill decision seen as an arrogant in failure.

I wish you to know that you are totally on your own if you I insist on your unpopular choice of who becomes next Governor.

Your arrogated succession plan is laced and over – saturated with irredeemable injustice which lessons can only be learnt; you have ignored   the rightful choice, but use all unholy and uncircumcised means to castigate, slander and mudsling whom the Lord have blessed and choose; whose singular efforts has not only stabilized the PDP party that you are erroneously enjoying, but also made your second tenure plan very successful even when he had all the opportunities to have retired you from politics and relegate you to the background.

You ignore him even when you know he is most popular, and that he has been on the arena with his face marred with dust, sweat and blood but never quitted; who knows his people and his people know him; who knows great passion for humanity even more than a pastor, and is overwhelmingly endeared to hearts of his people.

Your Excellency, kindly have a rethink over this your action and truly ask God to give you a sense of redirection, and most importantly, to give you the will power to see above pride, arrogance and fear of anticipated self defeat, and make a “U turn” on the unpopular decision and do only the right thing so that in the end, as a state and as a people, we shall in one accord take back our precious state and lead it to the promise land.

Your concern at this point should not be whether God who is for all is on your own selfish side because God can not be coerced out of His Will; but your concern should be for you to seek God and be by His side for God is always right.

A word is enough for the wise and let those who have ears ear what the spirit has said.

I remain your loving brother;